There is a Taoist story of an old farmer who had worked his crops for many years. One day his horse ran away. Upon hearing the news, his neighbors came to visit. "Such bad luck," they said sympathetically.

"Maybe," the farmer replied. The next morning the horse returned, bringing with it three other wild horses. "How wonderful," the neighbors exclaimed.

"Maybe," replied the old man. The following day, his son tried to ride one of the untamed horses, was thrown, and broke his leg. The neighbors again came to offer their sympathy on his misfortune. "Maybe," answered the farmer. The day after, military officials came to the village to draft young men into the army. Seeing that the son's leg was broken, they passed him by. The neighbors congratulated the farmer on how well things had turned out. "Maybe," said the farmer.

It seems as if people often interpret "dispassion" as emotional vacancy. But is it? I guess I distinguish the two as expressing versus experiencing. You can have the experience of an emotion and still choose how you express it.

The conscious choice of expressing an emotion involves more pieces of information than just the thought/event that generated the emotion in the first place. In the case of the old Taoist farmer, it would seem that his life experience allowed (or cursed) him with a sense of context and perspective that "moderated" his response to the things that were currently happening in his life.

Would you say that he didn't experience joy or sadness? Or rather that he was just aware of how life worked, and kept from getting too caught up in the drama of the ups and downs?

One of my friends, who has been following this journey via my blog suggested that it could be useful to others if I wrote about the Fear.

I concur. I think it's important for people to see the whole realm of human emotion. The thing is, up to that point, I hadn't really experienced much fear. And I didn't want to write it about from a conceptual "what if" perspective. I wanted it to be palpable.

When I woke up last Monday morning, I finally started to feel a hint of anxiety about the appointment I had with the surgeon that afternoon. I knew that we were going to get a much clearer picture about what was going on. You might remember that for most of the last couple of months, I have been 100% aware of what the options COULD BE, but I was still holding out for the better options. I believe my line was "I will remain in a positive, upbeat mood until there is a reason to not be."

I knew that this appointment was going to collapse the probability wave on my Schrodinger's cat.

I am pretty good at dissipating the energy of emotions like anxiety, anger, fear, etc...but I know what anxiety feels like. Meaning, I know where I feel it in my body, and I know how it can rob me of the desire to "do things." I had planned on doing about 45 minutes on the incline trainer, and I was aware that that small whisper of anxiety, generated from the fear of what might be true, left me feeling weak and uninspired.

I decided that regardless of the outcome of the appointment, there was probably no scenario that existed that was going to benefit from me NOT doing that workout, so in one brief moment of inspiration, I changed and got myself to the incline trainer.

It wasn't the best workout I have ever had, but the work was put in, and I felt better about that.

Interestingly, while in the waiting room, I was calm again. Calm with inevitability, I suppose. There was very little I was going to do at that point that was going to change the outcome, so I just took in the experience of a sunny afternoon, hanging out with Rose.

So, according to Dr. Evan Ong (via his now famous dry erase board drawings): 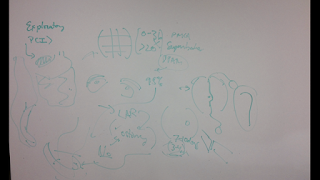 Translation: His visualizations during the laparoscopy, plus the biopsy results, indicate that I don't have "cancer." Instead I have DPAM.

If you look back at the "whiteboard of possibilities" from my first appointment with Dr. Ong, you will see DPAM listed as one of the options. (Oddly, as "bad" as it is, it's one of the best possibilities written on that board.)

Maybe it's because less than .06% of the US population has it. (I was really hoping this would at least make me "one in a million," but the math doesn't work out. Still...I am pretty special, in the larger scheme of things.)

Here is a little help for those playing along at home: 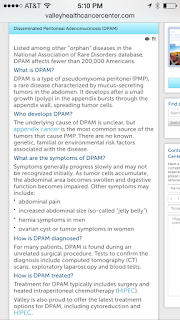 You might notice a few things, like, for instance, it looks like it really sucks. I would tend to agree with that assessment. I suppose the next thing that might stick out to many people is the treatment. The thing is, I had already researched the treatment options, so that was not new to me.

What stood out to me was this line:

"There are no known genetic, familial or environmental risk factors associated with the disease."

I don't know how the pie chart breaks down for you, but for me, I am left with one unaccounted for slice: "an act of God."

In other words, God and I have a lot of talking to do. Preferably over coffee, and perhaps even with a nice pastry. (It's not like it's going to hurt at this point.)

Of the things listed on Dr. Ong's white board of possibilities, probably one of the "best" options. Sweet.


The NOT SO GOOD:

The surgery is an intensive 10-16 hour endeavor, involving debulking of the effected tissues, removal of organs (or parts of organs) that are effected, and a heated intra-abdominal chemotherapy treatment called HIPEC. They basically pour it in, slosh it around to get to all of those hard to reach areas, let it sit and "cook" for 90 minutes, then take it out.

7-10 days in the hospital, 3-4 months recovery. Hopefully enough remaining internal parts that I can still be active and poop normally.

Rose and I have this little "joke" about how bad something can be yet still be "better than cancer." It's crazy how your perspective changes. About everything, really.

Because this disease process has been going on for some time now (years), and because it is a slowly growing thing, Dr. Ong has given us permission to postpone the surgery until mid-October, after Rose's OCR season. This will give us a chance to go ahead with our plan of moving to altitude for the months of August and September. The only condition that we have is that if I get symptoms, or if a CT at the end of August shows things getting worse, then I come back to Seattle and do the surgery as soon as I can.

I am really grateful that we have those 90 days. I think it's important for Rose to get some altitude training in, and, it gives me a chance to research all of the woo-woo options. I don't buy a small kitchen appliance without researching it on-line for 3-4 days, can you imagine the research project I have ahead of me now?!? As for the woo-woo, let's save that for the next post. It makes more sense if you have context. :)

"Statistics would say that most of my Facebook friends who are reading this post right now have had, do have, or will have some type of major medical issue in their life. So all I can say to you is what I have said before:

Go on a rampage of appreciation, and keep perspective around the troubles and stresses of your daily life. If you can make your inner space large enough to hold both your stress and your gratitude, most of your days will be full of happiness. 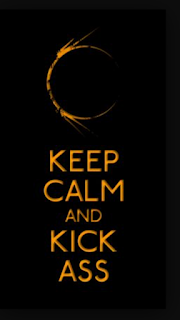