Where I Am Now

"If you know me, then you know that I do my best to not waste the currency of the present value of life on the high cost of future scenarios that may or may not happen. It's a bad exchange, and you lose too much in the process. The life that you are living, right now in front of you, is not only the most precious, but really the only life that you have. There very well could be some not so great days in the future, but until those days arrive, I will continue to live with as much happiness and kindness as I can." - TJS, Facebook post, 5/28/15

The reason for such a long absence is that "the life I was living," the one right in front of me, involved work, appointments, and then moving out of the house I have owned for eight years. It was a long, hard push to get through all of that! Then I took some time to get settled in at our new (house sitting gig) place, and then I left town for four days. Just now re-acclimating to the next stage.

There have been two medical appointments since I last wrote.

The first one was with Dr. Ong, the surgeon who specializes in this kind of stuff. One of the first things he said when he came in to the room was, "I don't know what you have." He also seemed to be almost humored by the fact that I have no "symptoms" (related to what they think I COULD have). I really liked him. Nice guy. He seemed smart, and he had a nice way about him. And he is clearly a visual learner/teacher, as demonstrated by what he scribbled down as he spoke to us: 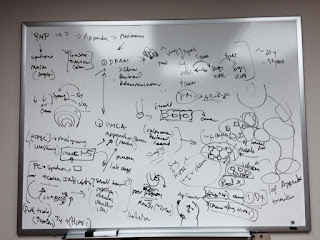 Like the oncologist, Dr. Ong is not clear about what is going on, exactly, but they both still addressed the "worse case" scenarios...as if they were the only scenarios possible. I don't know if that is because they really think there are only two to three possibilities, or if it is just their job to approach this AS IF these are the only possibilities...until ruled out.

I continue to hold out for the latter, because as I have mentioned before, as long as there is uncertainty, there is a chance for something that is better than worse. :) I chuckle at myself from time to time about that thought. Is it just being hopeful, or is it being in denial? Either way, it seems to provides the best bedrock on which to live in the present; one based on the moment in front of me rather than one based on the fear of a possible future.

As an intellectual exercise, I do struggle with the idea that denial could be a favorable/desirable path. I suppose the optimal case is that one can be expansive enough inside to hold it all; to hold all of the potential outcomes while still maintaining the mental and emotional equanimity to live consciously and with intention, unhindered by the fear of "what if" scenarios. It seems to be the nature of human thought to dwell and inhabit, however. And where those thoughts choose to take refuge becomes our experience. So I don't know, perhaps "optimistic" and "denial" can both work for us in some cases.

The second appointment I had was a colonoscopy. The night before my test some labs were posted to my on-line chart. They were cancer/inflammation markers, and for the first time, I felt a little negative. All of the markers were elevated. It was pointed out by two friends, however, that a) the markers are, for the most part, not specific, and b) while my numbers were elevated, they weren't really elevated as high as some of the ranges that signify not so great things.

The results of my colonoscopy showed that my colon was in good shape (a huge relief), and that there was a tumor on my appendix. A biopsy of the surface of the tumor showed normal cells. While good news, we still don't know what is happening inside the tumor.

On Tuesday, 6/30, I have a laparoscopy to remove the appendix (and tumor) and to take some tissue samples from other areas of potential concern. So, obviously, I am hoping for the best news possible.

If you know me well, you know that I am equal parts "woo woo" and "critical thinker." These polarities are not always easy to reconcile in the mind and life of one man. Rather than seeking one true balance point, I find it more helpful (and practical) to shift across the spectrum, allowing both my intuition and intellect to guide me in the moment. I think we all do this, by the way, we just don't all acknowledge that we do it.

So this Tuesday, let us let the woo woo reign supreme. I am accepting all prayers, petitions, mantras, healing vibes, positive thoughts, and, well, maybe no animal sacrifices, please....that doesn't feel quite right.

Also, recognize that this is a big Universe, and I am not the only person in it seeking these soft, warm fuzzies. So after you cast some out in the Universe for me, please be sure to throw a big handful out for everyone else in need as well!

Until then, go on a rampage of appreciation.