A Pivot Point; to New Beginnings and Grand Adventures

I started this blog in May of 2015 to document my path through my PMP diagnosis, treatment, and recovery. To say whether that documentation was, in the end, written for you or for me is still not clear.

What is clear to me, however, is that now, a year later, it is time to pivot and chart out on a new trajectory.

Despite my insistence upon "not living the narrative of the disease," this blog, for the most part, still existed within the context of disease. And while my message may have been about living life and staying positive, the dark shadow of cancer was always there, cast on the ground, following closely behind.

I suppose one could say that it was precisely the contrast against that dark shadow that made the words seem so bright.

But there are other ways to build contrast beyond grappling with the dark. One way is to try to shine brighter than the light around you. It seems as if the human condition is predisposed to default to "normalcy;" a kind of sleep-walking through the relative highs and lows that exist within one standard deviation of life's mean. (And here you thought you would never need to know statistics...)

So if we tend to live most of our lives in the "dusk" of consciousness, there is a way to build contrast, and to shine out brightly, without needing the threat of so much darkness.

I will be writing about what this looks like for me, but what does it look like for you? In what ways can you rise out of your ordinary patterns, even if just for a moment, to feel the full radiance of Life?

THAT, in my mind, is the ultimate Grand Adventure.

But, Rose and I are about to embark on another adventure as well. On Thursday we leave on a grand road trip. The first stop will be the Montana Spartan Race; then on to Boise, where we will fly to OK City (and back) for American Ninja Warrior; then we will continue on to our temporary summer home of Woodland Park, Colorado.

Where are we going after that? Well, you will have to follow along! Race Sherpa Rises is now set up on Facebook, Twitter, Instagram, and yes, even Snapchat (did I seriously sign up for SnapChat?). We have a van, we have some sponsors, and we have the courage and the desire to make this an epic year.

We hope you tune in and join us on the adventure!!


A final thought: the other day I wrote out "cancer survivor" and started thinking about the fact that we have all survived something, right? Very few of us have gotten this far in life without having to deal with numerous trails and tribulations. So, in essence, we are all in the same boat. Get out there and Giddy Up!! 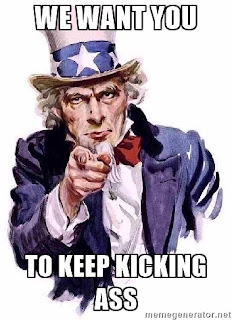