My Tribute to Three Important People

This is the post where I pay tribute to three people who had a profound impact on my current state of affairs. Without these three people, some aspect of where I am, and how I am feeling, right now, would be different.

Of course, many more people deserve to be mentioned. The nurses and my family and my friends have all been instrumental in this surgery and recovery. But there are three who deserve their own personal shout out.

I've written about the story before, both on this blog and on Facebook, but a special shout out goes to my friend Holly Holycross Chandler. Holly is the reason I came to Omaha to have this procedure done at Nebraska Medicine.

The short version is that Holly and I went to high school together (in the 80s) and are Facebook friends. When I received my cancer diagnosis in May and started this blog, Holly wrote to me to tell me that she works on these surgery cases, and she encouraged me to come see Dr. Jason Foster about my case.

At the time, I had already started the process with Dr. Evan Ong at Swedish Medical Center in Seattle. I was happy with my appointments with Dr. Ong, so I just thanked her and moved on.

She kept writing. The next email was a little bit stronger, and talked about all of Dr. Foster's outcome numbers; percent of re-occurrence after five and ten years, percent of complications from surgery, etc... By this time I was living and training in Colorado with Rose, so while I was still happy with my decision to move forward with everything in Seattle, I was less connected to Seattle at the time. In fact, Rose and I had already been weighing the other options regarding having the surgery in Omaha versus Seattle. (Specifically, that I am from Omaha, and my family still lives there, so I have a huge support system available there, AND, my father has been having some medical issues as well, so it would be a lot easier on my family if I had the surgery in Omaha.)

Holly's next email included Dr. Foster's cell phone number. She had spoken to him about my case and he agreed to give her his cell phone number to give to me so that I could call him. She insisted that I at least see him for a second opinion.

As it turned out, I had already been thinking that I really needed to seek out a second opinion on such an aggressive surgery, and suddenly, Dr. Foster stood before me as the perfect option.

It took a few weeks to make the connection, but we finally made it work. I had a great talk with him on the phone, and made an appointment to see him after Rose's championship races were over. 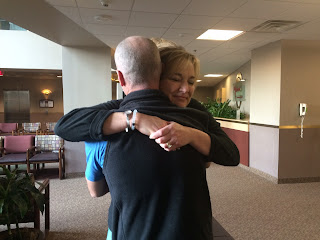 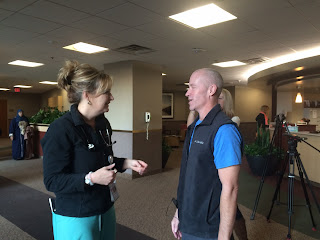 As they say, the rest is history.

Throughout this whole experience, Holly has called me "inspirational" and "a hero." I can't speak to that, although if my words have found their place in to someone's life in some positive way, that is terrific. The truth is, it was Holly's adamant persistence that made all of this possible.

So I send a special shout out to Holly, for both her kindness and her insistence. I am very grateful to her for her part in all of this.

[A local news station did a story on us, you can find it here. They didn't get everything right (the pain, the chemo, etc), but you get the idea. :)]

In every story there is usually an unsung hero. A person who is doing a lot of work in the background but not getting a lot of credit.

Amber Burke is that person in this story. Amber is Dr. Foster's nurse. I know what she has done for me, so I can only imagine how involved she is with all of his patients.

Four days before my surgery, and the day before I was scheduled to fly out of Seattle for Omaha, Amber stepped in and started making the calls to LifeWise herself; updating me any time she came up with new information.

The day before my surgery, when I was already admitted in to the hospital, Amber continued to jump through all of the hoops to make it all happen. I don't know how much extra time she spent on it, but I imagine it was quite a bit. 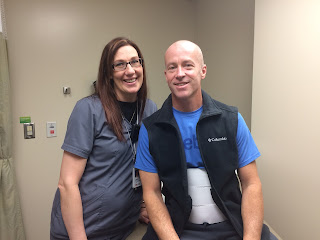 And somehow, almost as if by magic, she pulled it all together.

Holly got me to Omaha, Amber got me to the operating room.

So I send a special shout out to Amber for all of her extra hard work to make the surgery happen. She is also pretty good at removing stitches, for your information.

Perhaps the real hero of the story, and not just my story, but many people's story, is Dr. Foster.

Dr. Foster gave Holly his cell phone number for me to call, and he made the time to speak to me on the phone for 20 minutes. I have worked with many doctors in my life, and Dr. Foster has a unique combination of skills. In addition to his surgical expertise, he is very personable, funny, knowledgeable, confident, and just has a great overall "bedside manner." 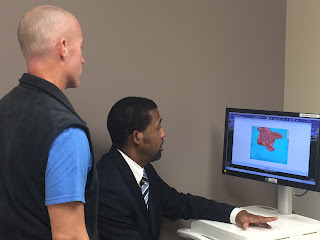 It was Dr. Foster's confidence and his communication style that really won me over. That his outcomes seem to be awesome did not hurt the decision. :)

So I send a special shout out to Dr. Foster for being the surgeon and the person that he is.

As kind of a post-script shout out, I want to say that I think it was Dr. Tellman who did the open and close at my surgery. If so, fine work, young man. The incision looks great.


It has been said that no man is an island. And I tend to think that even those who claim to be "self made" might find, on closer inspection, that they had people along the way that gave them the means or the confidence to push onward. If I have written something inspirational, or acted in a way that someone found meaningful, it is a result of the teachers and the supporters I have had in my own life.

And when we look back at the tapestry of our lives, and identify how the strands were woven together in a particular way, the three people listed here will all be noted as some of the most influential people in this event of my life. Another thank you to all of them.